I climbed my first 14er on my 40th birthday, and have summited four more since. The question this year was: how do you top that on your 45th birthday? Easy, enter the Mt. Whitney lottery. I did, and I won the lottery to climb Mt. Whitney (highest point in the lower 48) on my 45th birthday.

Three weeks prior, I completed my fourth half-marathon followed by a Warrior Dash the following week. What's a Warrior Dash? Google it. I was in better shape for this trek than any previous 14er, so the only question was acclimation. I have never had a problem with altitude but I spent the previous five days hiking and fishing at elevation, just in case. I spent the day before the hike doing nothing except lounging around the Whitney Portal campground. I had put in over 30 miles on the trails in the previous three days - I needed the rest!

The first three hours of the hike was in the dark, other than the occasional light from the multiple headlamps I met on the trail. I had planned to take 7-8 hours to the summit but the miles were clicking off quickly and I found myself at Trail Camp (6.3 miles) by 6:00 AM. I decided to top off my hydration bladder here before starting the switchback section of the hike. This would turn out to be the only time I stopped on the entire climb...I was moving on!

As I started up the switchbacks, I was able to turn off my headlamp as the sun was beginning to peak over the eastern Sierras. I also took this opportunity to put on another layer as it was getting much cooler as I gained elevation. 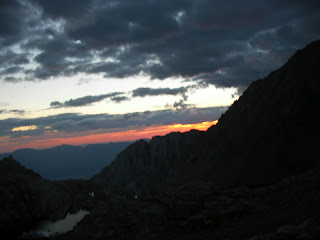 I typically don't like switchbacks but the next 1,500 feet of elevation gain would have been brutal without them!

I continued to make great time through the switchbacks and as I neared the cables I was able to catch the summit in alpenglow. 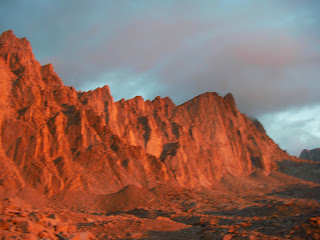 Then, the vertical section of the climb was almost complete as I looked back on Trail Camp from Trail Crest. 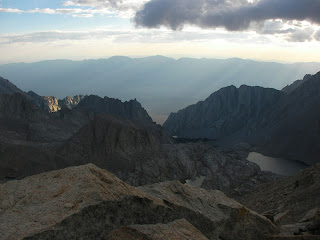 Reaching Trail Crest was a relief but the summit was still over two miles away. 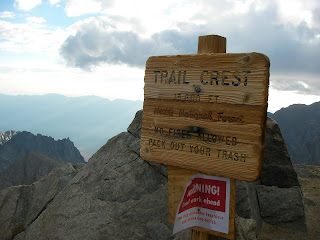 Along with reaching the end of the eight miles of vertical hiking, I also added another national park to my list. This is probably not how most people enter Sequoia National Park. 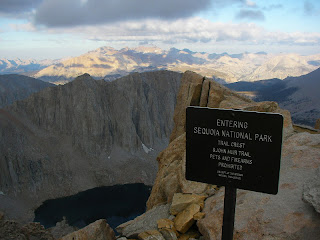 I took this quick video of Sequoia National Park from Trail Crest.
﻿
As I stopped briefly to snap a few photos, a group of younger hikers asked me to take a group photo of them at the Trail Crest sign. After taking their photo, they commented that they had been watching me climb through the switchbacks and they told me I was "moving on". That was all of the motivation this 45-year-old needed to push through the final leg.
As I continued my hike, I encountered something on the trail I wasn't expecting - exposure! I don't like hiking on ledges, let alone ledges over thousand feet drop-offs. I heard one of the younger guys in the group repeat several times: "Eyes on the trail, eyes on the trail". I followed his lead and kept my eyes focused directly on the trail in front of my feet.
If you look closely at the next photo, you can see a hiker in the upper right on what is the "trail". 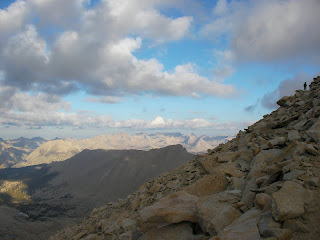 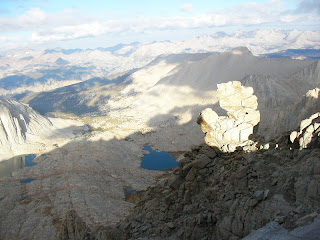 As I continued toward the summit, I stopped briefly to look down through the Needles. The views in every direction were spectacular! 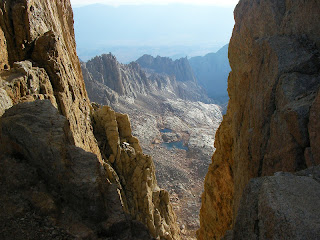 Shortly after the Needles, the view of the Smithsonian Hut came into view through the clouds. I knew then that I had made it! 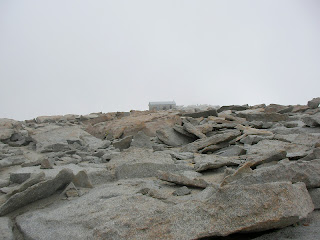 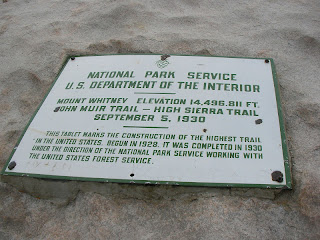 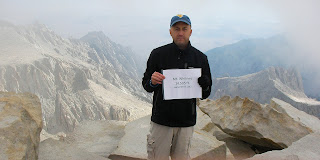 Do you want to know what 6,000 feet of elevation gain looks like? The trailhead is almost directly below me in this photo from the edge of Mt. Whitney's summit.
﻿ 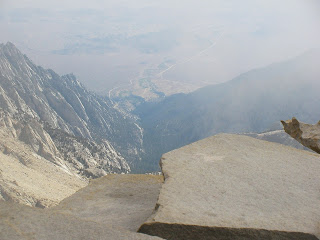 Trail Camp was straight down! 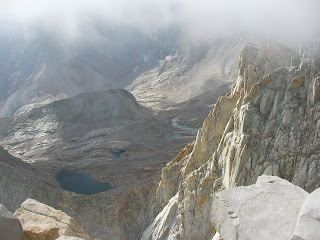 I spent a few minutes on the summit taking photos, refueling, and just taking in the amazing views. It's not very often you can look down on another 14,000 foot summit. This view is looking south over the Keeler Needle an Mt. Muir (14,008 feet). 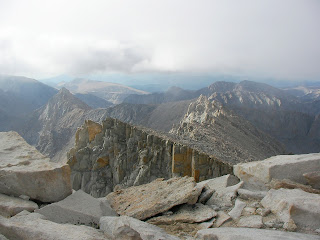 The next video is the panorama looking south over Keeler Needle, Mt. Muir, and eastern edge of Sequoia National Park.


The next short video is looking north over Sequoia National Park, King's Canyon National Park, and (finally) another neighboring 14er in Mt. Russell (14,094 feet). Mt. Russell's summit is covered by the clouds.


I couldn't spend much time on the summit, I still had an eleven mile hike ahead of me, and downhill has always been harder on me than climbing.

However, I did take the time to take more photos on the way down. Over half of the climb to the summit was in the dark so it was nice to see some of the views in the daylight. 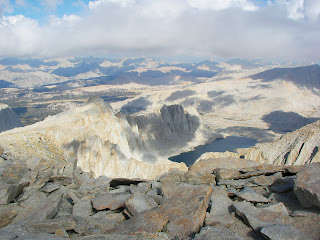 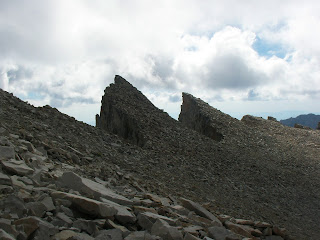 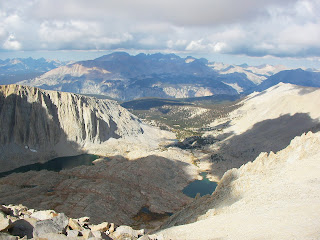 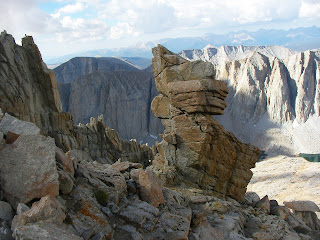 Can you imagine an 8-9 mile hike to work with over 4,000 feet of elevation gain? Then, once at your office, you have to swing sledgehammers/picks, and move hundred pound rocks - all the time you are over 12,000 feet. Those guys were machines!!

I finally made it back to Trail Camp and was able to see the Whitney summit in the daylight. 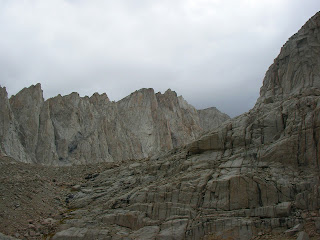 I continued my descent and I was amazed at the views I missed hiking in the dark. I wouldn't have changed my start time to see these in the daylight. It was nice to pass other hikers on their way up while I had already summited and was headed down.
﻿
Looking down on Trailside Meadow and the location of Outpost Camp. 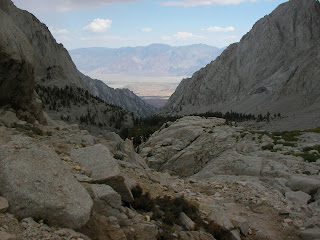 Passing above Mirror Lake with Mt. Whitney looming in the background.
﻿ 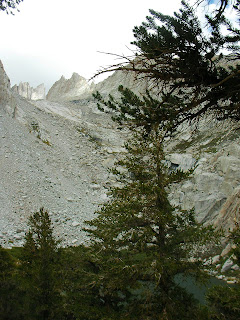 Trailside Meadow and Lone Pine Creek dumping into the meadows via a nice waterfall. 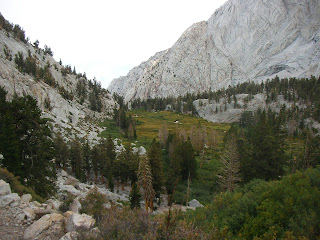 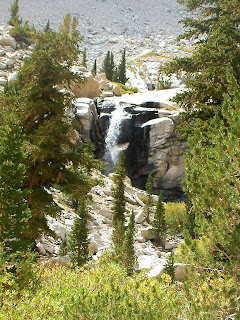 Finally, leaving the Whitney Zone - the reason I had to enter the lottery. The United States Forest Service limits the number of entrants into the Whitney Zone, it's an amazing area and protecting it by limiting entrants is a great idea.
﻿ 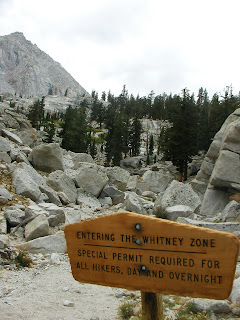 I thought I was almost done when I left the Whitney Zone...wrong! I still had 2-3 more miles of steep downhill. The trailhead is (again) almost directly below me.
﻿ 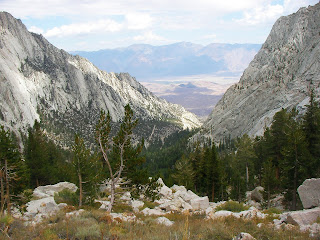 My final photo of the trek, another requirement for entering the Whitney Zone. Pack it in, pack it out...everything! 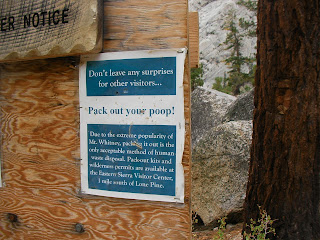 You can find the Find me Spot trip report here:
http://www.findmespot.com/spotadventures/index.php/my_adventures

Now, the only question remains: what to do for my 50th birthday?

Email ThisBlogThis!Share to TwitterShare to FacebookShare to Pinterest
Labels: California